I started Primary School around 1965 – just at the time when ITA had been introduced as the latest ‘fad’ for learning to read and write. Between the ages of 5 and 7, this was used in the reading books I was given at school and it was only at age 7 that I was moved on to books with normal English spelling. From this time onwards, the use of phonics was employed to help ‘sound-out’ unfamiliar words. 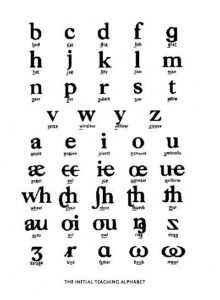 The Initial Teaching Alphabet had 44 symbols instead of the conventional 26; each of the 44 symbols representing one and only one sound. The alphabet was basically phonemic rather than strictly phonetic. Twenty-four of the 44 symbols were the traditional ones; 14 of the augmentations looked very much like two familiar letters joined together.

“The Initial Teaching Alphabet is a phonemic alphabet based on the phonemic sound system of the English language. It was designed to present the beginning reader and writer with a logical and reliable reading and writing system. The phonemic alphabet consists of 44 sound-symbols with each symbol or character representing one sound in a word. The alphabet adheres closely to traditional orthography. The symbols are lowercase. Certain conventional English spellings have been retained such as the c and k, which have the same sound.

As they become fluent readers and writers in i.t.a., they become aware of the conventional spellings in traditional orthography. They know that they can write one third of the words that are similar and the one third that are slightly different. The rest of the words they know they must learn to spell. They become proficient readers and writers without struggling with complex spelling patterns in the beginning stages of literacy development.”

My inability to spell many words correctly, in early adult life, was undoubtedly due to the use of ITA and it was only with the help of my mother’s insistence that I took matters into my own hands and asked her to buy me one of the first electronic spell checkers. Any time I wasn’t completely sure of a word, I entered it into the checker. As time progressed, I found that I started to remember the correct spellings of words and used the checker less and less. I would say that over time, I retrained myself to become a competent speller. Only very occasionally now, do I have problems with some words.